These courses of Reinforced Continuing Training are offered as a bonus to the persons who hold the “ GOLD ” Club Card.
They are principally intended for the phosphenauts who have reached a high level of energy by practicing intensely the exercises. Under the direction of Daniel Stiennon, the workshops are particularly intense and full of psychic experiences.

These courses are private and can assemble from 20 to 200 people, depending on the theme of the course and the level of the participants. 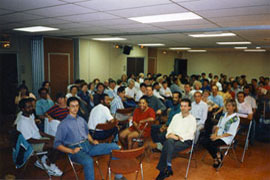 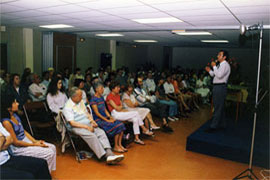 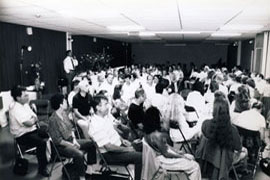 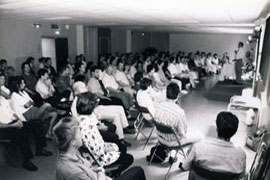 Fernando R.
In the early afternoon, we practiced floor exercises: 2 receptors were laying on the floor, in the middle of the room, while all the other participants had to perform the rotation of a visualized image above them. At a certain point during the exercise, this whirling image became denser; I started to feel the presence of an energy in the center of the room, as well as a light coming from above, illuminating more and more my field of vision. When Daniel Stiennon told the two receptors that he was going to carry them along in the vortex, I suddenly found myself sucked up by that vortex. It generated an incredible sensation of rotation in my head and, later, every time Daniel was carrying them along, I was carried along, too. The sensation of acceleration was becoming more and more intense and, at times, my field of vision was intensely illuminated.
Then, the persons who had taken the role of receptors formed a circle in the center of the room. There was about ten of them. We were sitting around them. Our role was to imagine a vortex in the center, above the circle of receptors. Daniel then carried the participants along to the “edge of the cosmos” at breathtaking speed. Again, I was carried along in that flow of energy. This time, it was my whole body that started to oscillate several times.

I am now conscious of the infinite power of thought and of the energy it can generate.
I have experienced fantastic moments, though I did not really understand what was happening to me. Nevertheless, I can say that it was very pleasant and that, during the remainder of the day, I felt a delicious sensation of coolness in my head. " It was great! "

Two years ago, I was an atheist. Since, I have evolved towards spirituality. Feeling and experiencing the universal creative principle has totally changed the way I approach life.
I started practicing Phosphenism to improve my memory and develop my spirit of initiative. But, I quickly realized that Phosphenism was an Initiation and that it would make me evolve quickly and profoundly, especially if I met other people that were following the same process. I have already noticed that my ideas have become clearer, more precise, more thoughtful.
I imagine that Phosphenism holds many more surprises and will allow me to understand aspects of life and spirituality that I still do not comprehend. Nevertheless, what I have already found makes me want to go forwards.

Nathalie R.
After practicing head sways for twenty minutes, the participants were deeply concentrated and the first effects were starting to be felt. At times, my head would stop swaying but, I did not notice it and I was under the impression that I was still practicing head sways. Then, we reached the end of the exercise. We moved on to a phase of observation. I was relaxing and letting go. I felt a formidable energy emanating from the lower part of my back. My body and my head started swaying laterally, then in all directions.
I felt very light and my body swung forwards. All the energy rose up my spine, spreading into my head, provoking a sensation of heat and tingling. I never thought that I could experience such a force. I was feeling so good, I did not want it to stop. When I started to recover, my body was extremely relaxed, I was floating. I did not even try to stand up as my legs were rather wobbly. I don't think my legs would have supported me. That was a great moment, full of powerful sensations and emotions.

A second grand experience with Daniel Stiennon. I was sitting face to face with an other person who was projecting a phosphene on me and concentrating on her visual chaos. I was wearing a sleep mask and I was concentrating on a rhythm. I was visualizing a rotating disk on my perineum. It was letting out sparks as it was rising up my spine, up to the top of my head, going back down in a whirling movement around my body, at a precise, regular rhythm. After a few minutes, my body spontaneously started to perform rotations that I did not control. It was as if it wanted to take off. Then, Daniel placed his hand on my shoulder and the whirling rhythm of the spray of sparks, located on my back and my head, became much stronger and more intense. Then, I perceived uncontrollable pulsations in all my muscles. My entire being was trembling. I didn't even remember in which part of the room I was sitting. But, I was feeling close to Daniel who continued to carry me along in the exercise, in order to go even further.

It is very difficult to express all the emotions that were produced by theses exercises as it is, above all, a personal experience. Words seem too dull to express such experiences…
I warmly thank Daniel Stiennon for letting me experience such intense and powerful moments.

Myriam G.
(…) I attended the first day of the training course. It is difficult to transcribe what took place there, as words cannot convey such things.
Though I was slightly apprehensive, as soon as the course started, I felt totally confident. I decided to take the risk to participate. It meant I had to lay down on a mattress while the people around me were concentrating on me, to transmit their rhythms and energies. How can one describe what took place then? I guess by starting with the beginning: my right hand started moving spontaneously. As I had be instructed to, I internalized that movement and, without transition, I suddenly was transported or carried along into the faraway. What is that faraway dimension? I do not know. But, I can affirm that I had lost all the material points of reference to which I was used. I was being sucked up at a tremendous speed. It seems important to note that only four of my friends (who were present on that day) seemed to have accompanied me in that “experience”. Their reassuring presence made me more than happy. It was also helping me as these sensations can be frightening the first time they are experienced.
Since Sunday, I am happy to be alive, happy to have dared going through that challenge, happy to have experimented with the higher levels of the practice of Phosphenism. In my profession as a schoolteacher, I also feel more confident. Everything is fine.
But, again, what is the value of words compared to the sensations produced by the practice of Phosphenism?

Anne M.
During the Continuing Training Course, I had decided that I would not play the role of receptor. But, Daniel invited me to do so, and here is the experience that followed:
“I was transported to a vast blue space and there, as if I was sitting on a ledge, I contemplated the Cosmos. It seemed at the same time near and far, as if I could touch infinity. It was fantastic… there is no other word to describe the experience.”